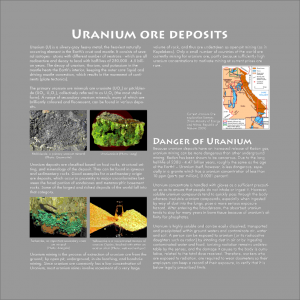 Poster-Presentation “Uranium ore deposits ” at CMCK
Uranium (U) is a silvery-gray heavy metal, the heaviest naturally occurring element in the Earth’s crust and mantle. It consists of several isotopes – atoms with different number of neutrons – which are all radioactive and decay to lead with half-lives of 250,000 – 4.5 billion years. The decay of uranium, thorium, and potassium in the mantle heats the Earth’s interior, keeping the outer core liquid and driving mantle convection, which results in the movement of continents (plate tectonics).

The primary uranium ore minerals are uraninite (UO2) or pitchblende (UO3, U2O5 ), collectively referred to as U3O8 (the most stable form). A range of secondary uranium minerals, many of which are brilliantly coloured and fluorescent, can be found in various deposits.

Uranium deposits are classified based on host rocks, structural setting, and mineralogy of the deposit. They can be found in igneous and sedimentary rocks. Good examples for a sedimentary origin are deposits, which occur in proximity to major unconformities between the basal portion of sandstones and metamorphic basement rocks. Some of the largest and richest deposits of the world fall into that category.